Katie Grudecki Katie has been living on the island of Bimini since 2003 and has worked at Bimini Sands since 2007.
Originally from Minnesota, she moved to Bimini in August 2003 and spent 4 years managing the Bimini Biological Field Station. During her stay at the lab she helped catch, tag and release hundreds of sharks and rays around Bimini and Florida.
Before coming to Bimini, she volunteered in Honduras for 5 months in 2003 â€“ some of the projects included helping an impoverished family build a home in La Esperanza, teaching conservation to elementary aged children in the schools on the island of Utila and educating local dive shops on environmentally sound SCUBA and boating practices on the reefs of Utila.
Katie has participated in educating the local children on Bimini about shark and other wildlife on Bimini and why it is important to protect the environment. She has also given presentations on conservation in local churches on Bimini.
Katie graduated with a B.A. in Global Studies â€“ Environment and Sustainable Development from the University of Minnesota in 2002. 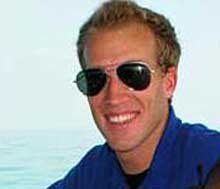 Grant Johnson Grant is originally from Minneapolis and has lived on South Bimini for the past 7 years. He joined Bimini Sands in June of 2007.
He managed the Bimini Biological Field Station (SharkLab) on South Bimini from June of 2001 until May of 2007. Grant has thousands of hours of experience with the wildlife of Bimini in and out of the water, everything from snakes to sharks. Heâ€™s caught and tagged hundreds of sharks, as well as many stingrays and several Smalltooth Sawfish. Heâ€™s also caught multiple lemon sharks, tiger sharks, bull sharks and one Smalltooth sawfish without the use of hooks or nets.
Recently Grant started a tagging project on the endangered Bimini Boa and a tree planting program with the All Age School on North Bimini. The tree program helped plant over 400 coconut palms and more than 1000 mangrove seeds around Bimini.
Grant has been active in conservation and environmental education efforts on the island for years and given numerous presentations on conservation in local schools and churches. He has a B.Sc. degree in Biology. 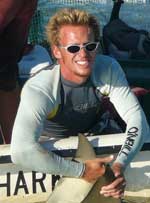 Christian Pankow graduated from Eckerd College in Florida in 2004 with a degree in Marine Biology. Following graduation, he spent three and a half years working at the Bimini Biological Field Station, or â€˜Sharklab,â€™ volunteering for six months before being hired as staff. While at the lab, he met a shark researcher, Catherine Macdonald, who was traveling as part of a year-long, world-wide fellowship looking at the sociological side of the shark tourism industry.Â  He accompanied her on the remainder of her trip which took them to many of the hot spots of shark tourism, including visiting the great whites of South Africa, mantas and whale sharks of Mozambique, Shark Bay Australia, and a brief sojourn to Malaysia.Â  Following this adventure, they made their way back to Bimini to crew on the Indigo with Dolphin Expeditions for two seasons, using their knowledge of the island to educate visitors about Biminiâ€™s remarkable marine life, including sharks, rays, and of course dolphins. They also enjoy teaching others about the diverse and important ecosystems of the island, from the famous coral reefs to the protected nurseries of the mangrove forests. Christian is currently in the second year of his Masterâ€™s degree research at Coastal Carolina University in South Carolina, where he studies the feeding ecology of local shark and ray populations. 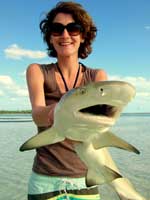 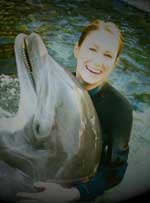 Connecting with nature in a deep and meaningful way has been a true desire of Jillian Rutledge since she was a child.Â Â  She believed she could â€œtalkâ€ with the animals.Â Â  As she grew up, this desire matured into discovering ways to foster interspecies relationships, as she trusts this is one of the ways in which humans and the planet can flourish together.Â  This led her to evolve as a Veterinary Technologist, Animal Behaviorist,Â  Energy Worker ,Yoga Practitioner, Life Coach, Underwater Photographer and Freediving Instructor with a focus on the connection between people and animals.Â  She is trained and experienced in the principles of Animal Health & Behavior, Solution Focused Coaching, Ashtanga & AcuYoga, Usui, Tibetan and Karuna Reiki, Bodytalk & AnimalTalk, Ancient Healing Techniques, Linking Awareness, Pranayama and Thai Yoga massage.Â  She is a certified freediving instructor for Apnea Academy and can safely hold her breathe for 5 minutes and dive to a depth of 40m.Â  She is a public speaker, instructor and workshop leader on the subjects of Human-Animal Relations, Breath, Self-Development, Freediving, Dolphins and Interspecies Communication.
For 12 years she worked alongside dolphins as a trainer learning more from the dolphins than she could ever teach them.Â  For the last three years, she has been working aboard a charter boat, taking people to swim with the wild dolphins of Bimini, Bahamas.Â  As a dolphin guide, she assisted people to find their Ultimate Breath and be at ease in the water all while demonstrating respectful and cooperative ways to interact with the wild dolphins, facilitating a connection.Â  She became an underwater photographer and it has been said that itâ€™s obvious that the photos are captured with a view from her heart.Â Â Â  It was here, she developed a skill in freediving, navigating beneath the sea on ONE BREATH.Â  This way of being in the ocean integrates all she has learned and brings her closer to the ocean, the animals and ultimately to herself.
By combining 3 powerful and proven breathing philosophies and techniques from Yoga, Freediving and Dolphins, she is thrilled to bring a method that can work for anybody to improve their breathing.Â  When you improve your breathing you give yourself a gift of Life Force. 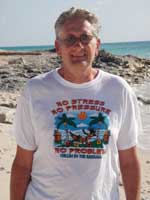 Dr. Joseph Dillard: „I like sharks because most of them are nicer than the average person I’ve known in my life. Sharks don’t lie, they mind their own business, they are straight-forward about their needs, and they co-exist just fine with everybody most of the time. When you swim with sharks you will often see all sorts of fish swimming around them, under them, above them, with everybody being polite, respectful, and minding their own business.

Before I started free diving with Claudia and with dolphins and sharks and rays off beautiful Bimini some five years ago I imagined sharks had personalities something like alligators: sneaky, vicious, and unpredictable. What I have found is something entirely different. Sharks mostly mind their own business in ways that humans can only envy.

What I have learned by swimming with sharks, dolphins, and rays is that you don’t have to fly to outer space or another planet or have a drug trip or mystical experience to access a mind-blowing, liberating new world. You don’t have to escape to anywhere to be free. That freedom exists inside you right now, but you seek experiences like swimming with dolphins to access that space.

What my work, Integral Deep Listening, is designed to do is to help you to take that experience home with you, to teach you to access it any time you want, to expand your possibilities and to access your emerging potentials. In the process you outgrow something we’ll have fun learning about called the Drama Triangle. You’ll learn to find and follow your inner compass so that you can make the most out of the unique gifts that you have been given.“

A more formal bio is at http://www.integraldeeplistening.com/about/about-joseph-dillard